After using a tree branch as a selfie stick for the GoPro recently, I realized the necessity of a monopod that’s beyond basic vanity. So I looked around for a real selfie stick and found that this Monopod Z07-1 was the cheapest – at ₹395 (after using a coupon) on eBay, there was no reason to not click the buy button. 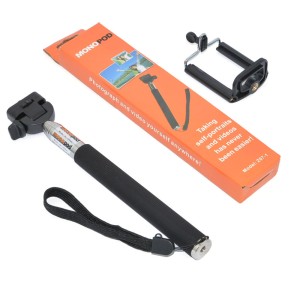 But after receiving it and trying it out, I wish I hadn’t…

Although, this thing isn’t entirely devoid of merits…

So, the verdict is that I could have bought sticks of wood worth ₹400 that would have been more reliable.

Or perhaps this Fotopro QP-903L, which sells on Amazon for only ₹970, but it doesn’t come with the phone bracket adapter thing, so you’ll have to buy that separately. The Fotopro bracket was around ₹390, but now it’s gone up to ₹500. Someone I know is using this one and he says it’s good.

But, in under ₹2,000, you’ll have a decent, reliable selfie stick with a mobile holder and a GoPro mount, which isn’t bad.

3 thoughts on “Monopod Z07-1 Selfie Stick is Cheap, but Weak and Unstable”